For everyone that wants to edit this topic, feel free to as long as it is not against our rules.

Thanks for the free badge! - lumbsmasher ppl 0 iq

wiki badge removed, it is no more now 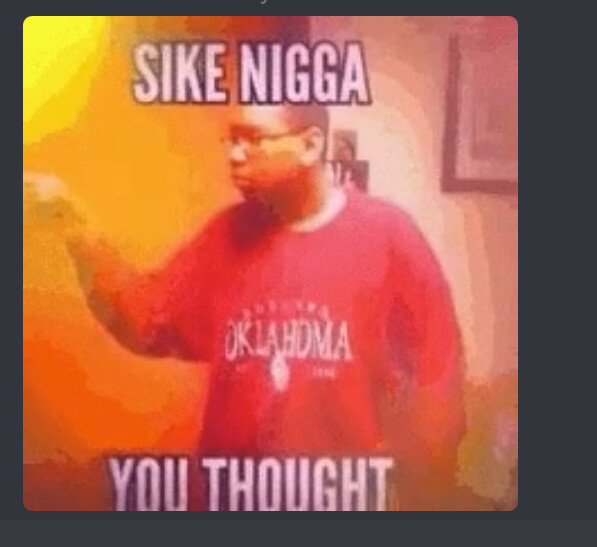 image597×547 52.6 KB
I should be unbanned all i posted was a screenshot of a conversation I had with a banned user the one who was scamming everyone using that gif as a joke its not like it just had the word by it self its obvious I cant say sorry because I already did its crazy as soon as I got support role then go to sleep im banned the next day im only mad because its time on the server i cant takeaway
E_P_I_C November 17, 2020, 9:15am #3

I never even said it its in a gif with other words. He was asking to be unbanned and kept begging after he scams me without giving me the money he owes so this is what i sent him I did not use this gif for the n word only used it because the guy on the gif is a meme so i sent it to him im sorry if offended you guys. Something i finally been waiting for which is support then i did not even get to do a single ticket there is other servers but it takes time makes me feel like this will happen on another server. I was foolish to send a screenshot of a conversation with someone who is not even in the server. Somebody who was banned for scamming.

Also alpha if you want you can unban OMAR the person that i said was scamming. He just gave me the robux he owes so i know i might not get unban but he should get unbanned aleast. I just wanted to help people but if there is no second chances for people who has been there for some time then the server is just not for me.